Hey guys, I guess I should totally start out by introducing myself. I’m Heather, Sharon The Awesome’s assistant. As well as keeping her on top of All The Things in the lead up to Sleeper’s release, I also do any reviews she needs me to. With that said, here is my first. Moonless, by Crystal Collier. 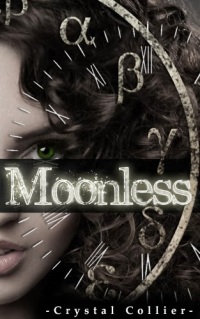 MOONLESS is Jane Eyre meets Supernatural.In the English society of 1768 where women are bred to marry, unattractive Alexia, just sixteen, believes she will end up alone. But on the county doorstep of a neighbor’s estate, she meets a man straight out of her nightmares, one whose blue eyes threaten to consume her whole world—especially later when she discovers him standing over her murdered host in the middle of the night. Among the many things to change for her that evening are: her physical appearance—from ghastly to breathtaking, an epidemic of night terrors predicting the future, and the blue-eyed man’s unexpected infusion into her life. Not only do his appearances precede tragedies, but they are echoed by the arrival of ravenous, black-robed wraiths on moonless nights.Unable to decide whether he is one of these monsters or protecting her from them, she uncovers what her father has been concealing: truths about her own identity, about the blue-eyed man, and about love. After an attack close to home, Alexia realizes she cannot keep one foot in her old life and one in this new world. To protect her family she must either be sold into a loveless marriage, or escape with the man of her dreams and risk becoming one of the Soulless.
– Blurb from Goodreads
Let me first start off by saying I’m not
the intended audience for this book. I don’t read a lot of books set in ‘ye
olde times’ but with that said, I really enjoyed it.
Moonless finds Alexis going through a pretty
unstable time in her life. She’s just become old enough to be married off,
keeps having some pretty disturbing dreams about the future, and is being
practically stalked by a blue-eyed hottie.
Great start to a book.
What I really liked about Moonless was it
kept you wanting more. There was so much suspicion and unanswered questions
right from the start that as soon as a question was half-answered, another one
would pop up to say howdy.
Collier weaved interest and intrigue right
from the beginning and it wasn’t until the very end that she gave you all the
pieces. I love books that keep you guessing and this was one of them.
On top of the mystery, there were two
really great characters that stood out. The first was Alexis’ sister-aunt
Sarah. She was flirty, and vivacious, and fun in a time when woman really
weren’t supposed to be. I could totally picture her going without stockings for
a day, or waving her bloomers out the bedroom window, just so people knew she
was home. We could totally be friends.
Then there was Bellezza. I think I fell in
love with her as soon as she was introduced. She is cray-cray to the maximus
and if Crystal wrote a book about her I’d be the first to buy it, no matter
when it was set. If you love a character who would burn down your house and
paint her face with your blood – here she is. She’d even do it with a smile.
Now, despite all that, I did find Moonless
hard to get into. I couldn’t figure it out at first and it took me a few
chapters in to work out what had me so confused. There’d be certain scenes were
Alexis would mention one person and then use the pronoun for another. This
seemed really odd to me until I worked out why. During the first half of the
book, Alexis doesn’t know Kiren’s name so she just refers to him as ‘He’. And
once I worked that out, everything became so much clearer.
Lastly, if you’re worried about a lack of
swoon (which I totally was) because of the setting you don’t even need to
worry. Kiren brought swoon to the table and made it his bitch.
If you love books with mystery, swoon, a
character that grows into herself, and some pretty awesome creatures, Moonless is definitely for you. (Just remember what I said about those first few
chapters).