I must confess I’m on a bit of a writing high at the moment. And there’s irony in it all.

I suffered really bad writer’s block after my dad died. However, I still had some things out there that I was hoping to get good news on. But I didn’t. Things just stayed stagnant.

Frustrated, I got mad at Karma for some reason. I felt I was owed some good after all the bad I had been through in the last 18 months (my grandma died too). Pretty silly I know, but that was how I felt at the time.

After telling Karma exactly what I thought of the lack of good things coming my way a light bulb went off in my head. What if Karma was actually a person? Well not just one person, but a whole clan dedicated to keeping the balance in the universe.

I was planning on making it into a novel after I finished the first draft of Dirty Rainbow, but then I saw a competition for YA short stories. So I wrote Karma as a short story. And it’s been short-listed. The first story I’ve written since Dad died and it’s a success. And now I’m expanding it into a novel. (EDIT: Karma was runner-up in the competition and I got feedback as my prize from Sara Foster. She gave me great comments on ways to further develop the plot and characters AND she thought the concept should be expanded!) 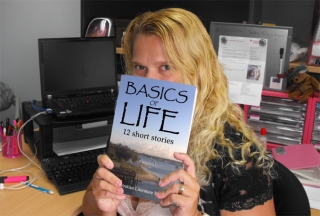 And this was after I also found out that a story I wrote dealing with a loved-one being diagnosed with terminal cancer, Growth, was being published in The Australian Literary Review’s anthology THE BASICS OF LIFE

These achievements are not huge life changing events in some ways. They are rather small achievements in the publishing world. But it’s a start. So thank you Karma, as now I feel like everything’s coming up Sharon.

Come on writers, work that keyboard, tighten those words, firm up your plot, edit hard or go home!

I’m not a big fan of editing. Give me someone else’s work and I can do it – hey that’s part of my day job after all. But when I re-read my own work my mind often reads what should be there rather than what is there.

Recently, I wrote a short story for a competition that was capped at 3,000 words. I decided to use a concept I already had for a novel and miniaturize it. That meant take the core concept, creating a couple of scenes to explain the plot (personifying a concept – a bit like Terry Pratchett by darker and less humorous) and tying up the conclusion.

I sent it off to my Beta and got some great notes, made her recommended changes and squeezed in just under 3,000 words. I was over the moon, until a thought hit me. Did she like the ending? She had commented on another short story that it felt like the end of a chapter not the end of a short story.

So I asked and she emailed back exactly that. D’oh! She thought there was more to come. So I called her and we thrashed it out. Of course she won – how can I argue with a former Uni Lit Lecturer? Besides, she was right.

Disappointed that I hadn’t gotten it right first time, I wrote more, about another 400 words and sent it back. Yep, my Beta confirmed I now had a workable ending – and 400 words too many. So I called again and was told to cut one of two scenes. But I didn’t want to – I loved them both.

So I was determined to cut more than 10% of my story without cutting plot content. I was mercilessly on the look out for superfluous words. And I found them! 400 of them!

I rearranged sentences more economically, I cut as many ‘thats’ and ‘ands’ I could, I culled unnecessary sentences – the frill bits.

At the end of it when I got to the word count I felt triumphant, then a bit crappy about how sloppy my writing was. But adhering to a word count helped me firm up my manuscript.

I’m thinking I might impose a culling goal on myself from now on so I can get in and edit with focus.

So how do you get motivated to editor or writing, or is it something that comes naturally to you?